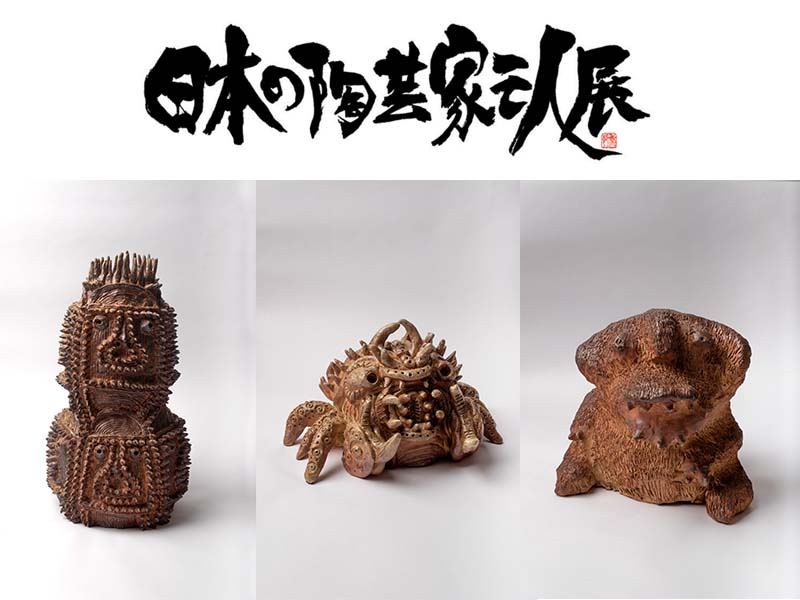 This exhibition includes over twenty-five highly individual works taken directly from the artist’s studios in northern and southern Japan alongside photographs of the artists at work, and the studios where they create. Often placed under the label of outsider art, this exhibition asks the audience to look at these artist’s ceramics as contemporary works, to be judged on their aesthetic quality.

At 37, Shinichi Sawada is one of the most recognised art brut artists from Japan. His work was recently featured in New York at Frieze Art Fair on a unique project booth curated by artist Javier Téllez, titled The Doors of Perception. In 2013 he featured in Massimiliano Gioni’s Encyclopedic Palace at the Venice Biennale. Gioni praised the way his work “connected to centuries of depictions of imaginary beings… I loved the combination of fidelity, realism if you will, and freedom of imagination: they displayed a faith in the power of imagination, depicted with absolute precision, that I had rarely encountered before.”

Sawada is diagnosed as being on the autistic spectrum, and has little verbal communication. He works silently and calmly, his fingers moving with complete certainty and dexterity to create his distinctive clay sculptures. Working straight from his imagination into locally sourced clay since the early 2000s, he is known for covering his works with little thorny spikes, taking around five days to complete each piece. Often creating totem like creatures with faces on many sides, his most recent work features denser, more rounded spikes, which his institution believe may have been influenced by working alongside Akio Kontani in their ceramics hut in the mountains.

Born in 1970, Akio Kontani only started creating art in July 2015 after picking up a leaflet for a local social welfare facility in the Shiga Prefecture. Since then he has been visiting a hut in the mountains alongside Shinichi Sawada, three times a week, spending up to five hours there each time. His works are often representations of animals and demons from the realms of his imagination – bold designs that are sometimes humorous and other times dark, always forming from the mouth, and suggestive of Sawada’s influence. Kontani’s work was shown for the first time outside of Japan last year in Art Brut Japonais II at the Halle Saint Pierre, Paris.

Nobuo Sasaki was born 1956 and began living in a social welfare institution in Hokkaido from 1970 due to his mental health. At first he did agriculture and textiles and now he focuses on woodworking and ceramics. His ceramic motifs often include animals, such as gorillas, bears, birds, or imaginary demons and friends – often with a feminine appearance as he believes these will appeal to females. He forms his ceramics by building clay onto rolled and rounded newspaper forms, adding extra clay to form the features. He uses various needle sizes to create the texture on the outer layers. Sasaki’s work has never been shown outside of northern Japan.

Outsider Art is an English translation of the French term art brut, which was coined by Jean Dubuffet in the 1940s. It was used to describe an art that was raw and rare, uncontaminated by tradition, markets and mainstream culture. Japanese outsider art has been termed as such, for less time than its European and American counterparts. There have been a few landmark European exhibitions of this work: Japon in 2008 at the Collection de l’art Brut in Lausanne, Switzerland; Souzou: Outsider Art from Japan in 2013 at the Wellcome Collection, London; and most recently Art Brut Japonais II in 2018 at the Halle Saint Pierre, Paris. Works were selected exclusively from artists with learning and intellectual disabilities working in supported studios across Japan, some of who are represented by the Jennifer Lauren Gallery.

Jennifer Gilbert has a passion for exploring the edges of the art world. She represents both well-known and evolving artists from around the world, who are self-taught, visionary and overlooked. Jennifer was keen to hold this pop-up exhibition to share with audiences three unique Japanese artists works that are both intriguing and thought provoking, whilst being aesthetically pleasing to the viewer. Although Sawada’s work has been exhibited and collected internationally, this will be the first British showing of Kontani and Sasaki’s ceramics, and the first time that their work has been available for sale.